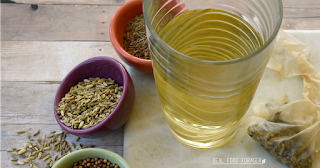 Let the tea sit for 10 minutes with the spices releasing their herbal properties into the water. Then strain out the spices to store inside a thermos / flask to sip throughout the day.
This recipe is to quench thirst, aids in digestion and removes impurities from the body’s micro channels that cold water cannot reach.
For better results you can drink 1 glass every morning on an empty stomach daily to see the usual fogginess, headaches or indigestion reduce.
I have a question for you:
What is 1 of your single biggest challenge when it comes to keeping hydrated?
Please comment below this article and share your story.
**********************************
1. KR Srikantha Murthy tr. Asthanga Sangraha Sharirasthan Ch 6 quoted from Ashtanga Hridayam Chowkhambha Krishnadas Academy Vol 1 p 403 footnote
2. KR Srikantha Murthy tr. Ashtanga Hridayam Nidanasthanam ch V v 46-49 Chowkhambha Krishnadas Academy, Varanasi

5 Eastern Personal Hygiene Systems We in the West Should Adopt – For Sustainability!

My 5 Tips For Urban Yogis Navigating Uncertainty – We are all in this together!

This is a single event page with sample content. This layout is suitable for most websites and types of business like gym, kindergarten, health or law related. Event hours component at the bottom of this page shows all instances of this single event. Build-in sidebar widgets shows upcoming events in the selected categories.